Manufacturers React to State of the Union Address 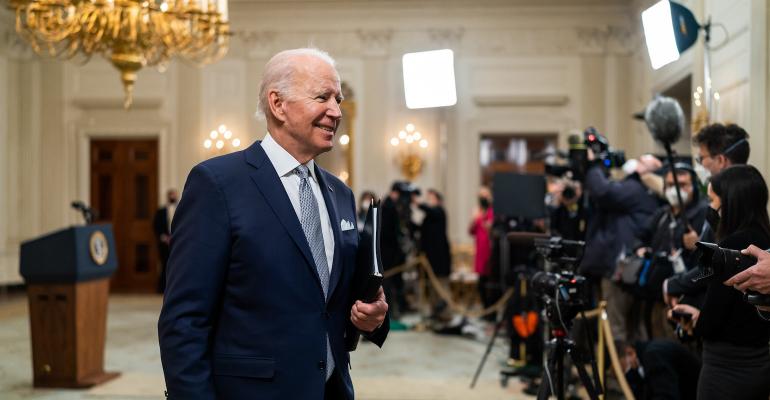 Following US President Joseph Biden’s delivery of his administration’s first State of the Union address Tuesday evening, a number of manufacturing organizations and executives issued statements voicing their reactions to the administration's portrayal of American manufacturing.

While National Association of Manufacturers (NAM) president Jay Timmons praised the president’s efforts to secure the passage of the bipartisan infrastructure law in a statement after the event, he cautioned that some of the Biden administration’s moves could hurt the country’s manufacturing sector.

“We strongly oppose proposals that would weaken our industry and threaten our recovery, including undoing the progress of tax reform and imposing policies that would disrupt our workplaces,” Timmons stated. “Manufacturers are working hard to fill more than 800,000 open jobs and connect more Americans with rewarding careers, and some of the actions outlined tonight would make it harder for us to solve this top challenge.”

NAM’s release did not explicitly say which policies could hurt domestic manufacturers, but some Republican members of Congress booed as the president spoke about his administration’s American Rescue Plan and voiced criticism of Trump-era tax cuts.

We agree and are ready to get to work. The stage is set for decarbonizing the economy, boosting U.S. #manufacturing, creating jobs, and increasing equity. #SOTU https://t.co/rBP0H2mrG6

A statement issued prior to the speech by the Association of Equipment Manufacturers (AEM) said North American equipment makers hoped to hear a “comprehensive strategy” to support US manufacturing, including efforts to combat ongoing supply chain woes and laws that would target China.

President Biden is gearing up to deliver the #StateOfTheUnion address, and here’s what the equipment #manufacturing industry hopes to hear.

What would you like to the President to say tonight? Let us know #SOTU pic.twitter.com/ltnYWnZOxU

A trade organization representing some of the world’s largest food and packaged goods manufacturers, The Consumer Brands Association (CBA), also issued a statement ahead of the State of the Union calling for the Biden administration to address rising inflation and labor shortages, as well as increasing support for domestic waste recycling programs.

“What affects the CPG industry affects the consumers we serve. And government policy affects the industry,” said the group’s president and CEO Geoff Freeman in a release. “We hope to hear smart policy proposals from President Biden that support the industry’s ability to deliver for consumers.”

Scott Paul, president of The Alliance for American Manufacturing (AAM), opined that many of the Biden administration’s policies are working, including investments in infrastructure, maintaining some of former president Trump’s tariffs to support US manufacturers, and an ongoing effort to pass a bill intended to increase the competitiveness of American industry in the global market.

“I can’t imagine many Americans – left, right, or center – believed Joe Biden would spark and industrial rebound,” Paul wrote. “But he has. We’re experiencing it now, and he’s putting the policies in place to sustain it.”

Views on the best path forward vary, but nearly all observers seem to hold the view that our nation is at a critical point where action is needed now as consumers face rising costs and companies encounter shortages of workers, high costs for transport and raw materials, and a slew of other issues.