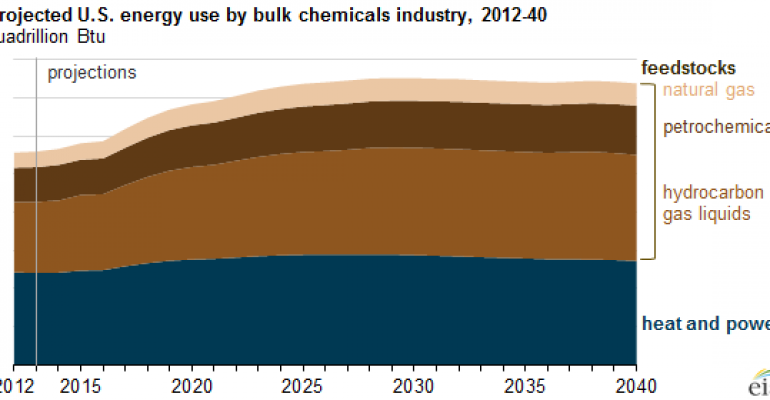 According to the U.S. Energy Information Administration, industrial sector energy consumption is expected to grow faster than all other sectors, according to EIA's Annual Energy Outlook 2015. A large portion of both consumption and anticipated growth is in the bulk chemicals industry, which is able to take advantage of increased domestic supply of natural gas, hydrocarbon gas liquids (HGL), and petrochemical feedstocks. While some energy is used in the bulk chemical manufacturing process for heat and power, most energy in that industry is used as feedstocks, or raw materials used in the manufacture of chemicals.

Unlike several other forms of energy consumption that have become more efficient over time, the energy required as feedstock to produce a chemical in general remains constant because the chemical reactions used to transform feedstocks into chemicals cannot get more efficient. For this reason, feedstock use growth tends to increase proportionally with the expected growth in demand for those chemicals.

Consumption of these feedstocks depends on the demand for products and the flexibility of the feedstocks. Currently, the use of natural gas as a feedstock is mostly restricted to nitrogenous fertilizers, methanol, and hydrogen gas production. Demand for these products is expected to increase, and natural gas feedstock use is expected to grow by more than 3% per year through 2025.

Feedstocks do not necessarily have to be sourced from fossil fuels. Some biobased feedstocks can be used to produce bulk chemicals in commercial quantities, but biobased feedstocks are currently not used in large enough quantities to be a significant feedstock source. Their growth will depend largely on the cost of producing biobased chemicals compared with conventional chemicals.