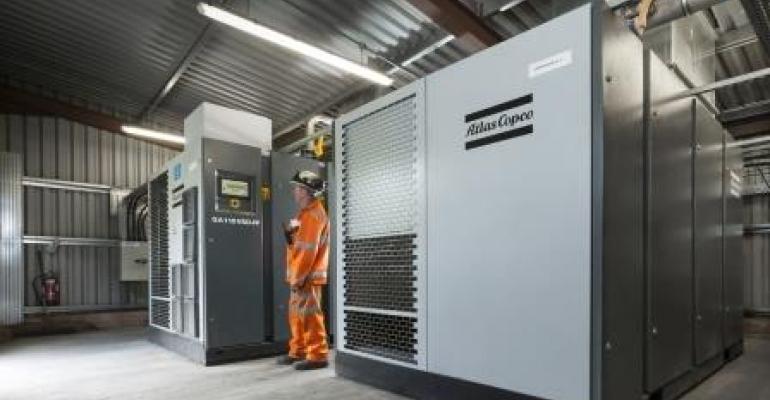 Compressors from Atlas Copco are providing an essential supply of compressed air to coal extraction operations for Unity Mine in the Neath Valley, South Wales. The decision to replace the existing diesel-driven compressors with Atlas Copco GA electrically-powered screw compressors has resulted in significant benefits in terms of process efficiency, energy use, and reduced environmental impact.
The mine, which re-opened in 2008, is now in the process of moving to full production with the capability to produce up to one million tons of coal per year. It is contracted to supply fuel for major industrial companies, such as the nearby coal-fired Aberthaw Power Station.
Unity Mine’s Cwmgrwach operation is a drift mine, meaning that miners can walk in rather than being transported, via a vertical mine shaft winding system, as used in other deep mining sites. At the mine, the coal seams are accessed by driving sloping tunnels through the ground. It was the first to be opened in Wales since the Betws colliery in Ammanford in 1974, and is poised to take advantage of a market whereby the increasing volume of imported coal, coupled with global price increases and demand, driven mainly by booming economies such as China and India, makes formerly uneconomic domestic sites commercially viable again.

Reliable Supply of Compressed Air Required
After the mine’s re-opening, the company’s management focus was on the reliability and efficiency of production equipment. “The initial plan  of the mine’s workings were based on the pillar and stall extraction methods that employ a continuous miner unit and secure the work with roof bolting, as opposed to arched roadways,” explained Duncan Kilbride, director of projects & procurement at Unity Mine. “These all require air-driven equipment fed by a reliable continuous supply of compressed air. We also operate pumps on a permanent basis to remove water.”
Air for these operations was supplied originally from a number of small, rented diesel-driven compressors, but there was growing concern with their mechanical reliability and the risks of any break in the regular supply of diesel fuel. This dependency issue, coupled with increasing rental and fuel costs, made it evident that replacement with more energy and cost-efficient compressors was essential.

New Compressors Drastically Lower Energy Cost
“We invited tenders for the system and Atlas Copco came up trumps as a one-stop shop solution for the compressors, filtration units, controller, and compressor house installation,” said Kilbride. “They scored as a world-leading specialist offering long-term options on a range of packages best suited to our needs within the required timescale, plus an ongoing support organization.”
Two oil-lubricated, air-cooled, full-feature GA110 variable speed drive screw compressors were installed together with a companion fixed-speed version machine. It has been calculated that energy savings in the region of £13,000 per year are achievable, in addition to substantial savings in equipment rental costs. These Atlas Copco compressor units provide base load and back up peak 7bar air to the drilling and roof-bolting equipment, and the water pumps. Current geological estimates are that there are reserves of 90 million tons of coal that will be extracted from the Cwmgwrach mine complex over the next 25 years.
For more information, visit www.atlascopco.com